Many years ago, I started adopting GTD, a framework that makes managing tasks and project simple and straight forward as long as you stick to the process. Ive been complimented by many of my supervisors since about how much work I can get done in such a short amount of time, so the system works if done correctly.

If you haven’t heard of GTD, or need a refresher, here are the basic concepts. There are 5 distinct phases of the workflow;

I recently reorganized my system and felt that documenting it for the web might help a few other folks out there. My system might seem complicated, but I used a series of automations & integrations with Microsoft Flow to streamline everything. So strap in, grab a cup of coffee, and learn how to be productive! 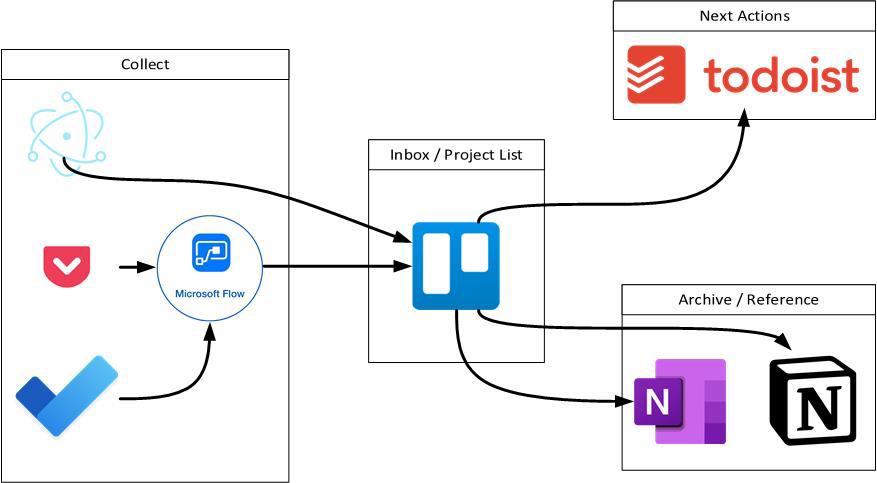 Everything I collect eventually ends up in a Trello list on my main board I call Inbox.

To collect everything, I use three different utilities directly: Microsoft Todo, Pocket, and a tool I wrote called Trello Quick Capture.

I use Microsoft Todo primarily on my iPhone ONLY because it is the easiest way to capture tasks in the least amount of taps. There is a long press feature on the icon that pops up a context menu to add a task, and hitting return on the keyboard adds it. This lets me add a task, return, add a task, return, etc.

I then have a Microsoft Flow flow (?) that takes any task added to Todo, creates a card in a special Inbox list on my main Trello board, and completes the task. (I do all my organizing in Trello).

I use Pocket to capture stuff around the web. On the iPhone, I can share pretty much anything to pocket and it doesn’t ask me any other questions, it just saves it to Pocket. And like above, I have a Flow setup to copy all my Pocket items into the Trello Inbox list.

The Pocket Chrome extension is stupid simple as well, so I use that to capture pages around the internet I want to go back to review.

Trello Quick Capture is really small app written in JavaScript (Electron + Vue) that is bound to a keyboard shortcut (Ctrl + O). It pops up a small dialog window over everything open on my computer that lets me type in a quick task and hit enter to dismiss the window. This creates a card in the same Trello list for processing.

Finally, if I need to capture an email into a task, there is an Office 365 extension that lets me send emails into Trello.

The common trend in my collection process is I want to be able to collect anything and everything in the least amount of clicks/taps possible, which just lets me keep moving quickly.

Organizing is a pretty manual process with very little automation to be honest. GTD has two primary types of items;

I used to have two boards to track Next Actions & Projects, with Next Actions being the primary board I would see every day, and Projects being a board that I’d come back to whenever I do a review of my entire system.

In my new setup, I actually moved all my projects into my main board, and moved my next actions to Todoist.

I made this decision so that whenever I organize and process my inbox, I can quickly scan my projects since I’m in the same board, Next Actions lends itself to a traditional list of tasks rather than kanban boards.

I opted not to use MS Todo because in my experience, its sync engine is not that great (I once ended up with 5 duplicates of some 200+ tasks/projects, which I was not happy about). And although Asana can display tasks as both a list or kanban board, I’m not a huge fan of the interface. I feel like its not the most intuitive and a lot of things require more clicks than I care to give it.

Remember, this system is all about speed and getting through it with as little effort as possible. No friction!

These are pretty self explanatory and I don’t have any fancy tools I use for this. Basically, every few days, I just scan all my projects and compare them against my next actions to determine what’s done or missing, then update accordingly.

Archiving isn’t necessarily a ‘phase’ in GTD, but it’s the result of simply deciding what to keep for later reference. My tool of choice has traditionally been OneNote since its pretty much everywhere and the tool does a good job at organizing. I recently started exploring Notion because OneNote doesn’t do syntax highlighting, and saving code snippets does look much better with a splash of color.

This system is the result of many years of trial and error, and it probably wont be my last revision of the entire thing, but what Ive setup does work well and thought some of you out there would benefit from setting up something similar.

Thank you for joining my TED Talk.

If you are interested in chatting more about my workflow or just want to nerd out about GTD, feel free to reach out to me on Twitter @brianmmdev or join my discord at fullstack.chat